Please access it, and you can experience the birth of consciousness system. BLUE likes the theme of AI and consciousness. This program is based on my hypothesis of consciousness. I have explained it on twitter several times. At this point I will explain it here again.

Abstract
Many people think that consciousness is hard to understand and is hard to simulate, though Apple Siri speaks internet guide or IBM Watson is going to try medical service. In order to approach consciousness there are some ways considered, for example: phisical approach or panpsychism approach. Giulio Tononi's IIT v.3.0 is different from both, but closer to panpsychism approach by Christof Koch using statistics. A new approach here is different from those. But this hypothesis has high affinities with IIT also. Additionally I am paying attention to Jeff Hawkins' theory: intelligence is based on prediction from memories. A new hypothesis shows consciousness is based on associative memory. And there are also secondary hypothesis: emotion, metacognition, free will, and creativity are all based on this consciousness in the narrow sense.

A key point is: if you can call even A simple memory, that shows a completion of minimum consciousness process. Ex (assumption): If there is the most simple conscious object which memorizes (and recognizes) blue LED light only, it can be conscious with "Oh, it is blue LED," after 450 nm dot light input. It does not have any associative memories, (because there is only one memory). Blue quale arises, and there would be a blue crystal consequently in the brain correspond to the input. If there are no associative memories, the object would not have any emotions like "wonderful, beautiful, fearful, and nostalgic," even if there is the dot light input. (At this point there is a precondition that there is no instinct which is equal to gene's memory and seamless to [usual] episodic memory... See "Emotion" below.) This is the hypothesis very far from Chalmers' Hard problem. (See "Hard problem" below.) If you can have many associative memories, the consciousness can be enhanced/complicated/enriched by them, of course.

An important thing is: Even a simple memory can be defined as consciousness individually. That is the first step of consciousness. Enhanced/complicated/enriched consciousness is realized by further process that is associative memories.

A few examples: Photodiodes are conscious. Even if they do not have memories, they work while switch on. Here they are simpler than that in IIT v.3.0. America is conscious. However it does not seem to be conscious, though it seems to have big memories. The reason is it does not have desire nor instinct which behave as gene's memory. Zombies are also conscious. If they have memories, I do not have the reason why I doubt its consciousness. (However, IIT does not accept its consciousness. Here is a small difference from IIT.)

Many people may doubt this hypothesis. I will accept many criticisms from many fields, and I appreciate many discussions. I think I can update this article after those discussions.

Figure (1) to (3): illustrated concept
I have explained my hypothesis of consciousness on twitter several times. I will explain it here again. Attached are three figures which show:

(1) Consciousness from macro-perspective (detailed explanation): That also shows consciousness in the narrow sense. 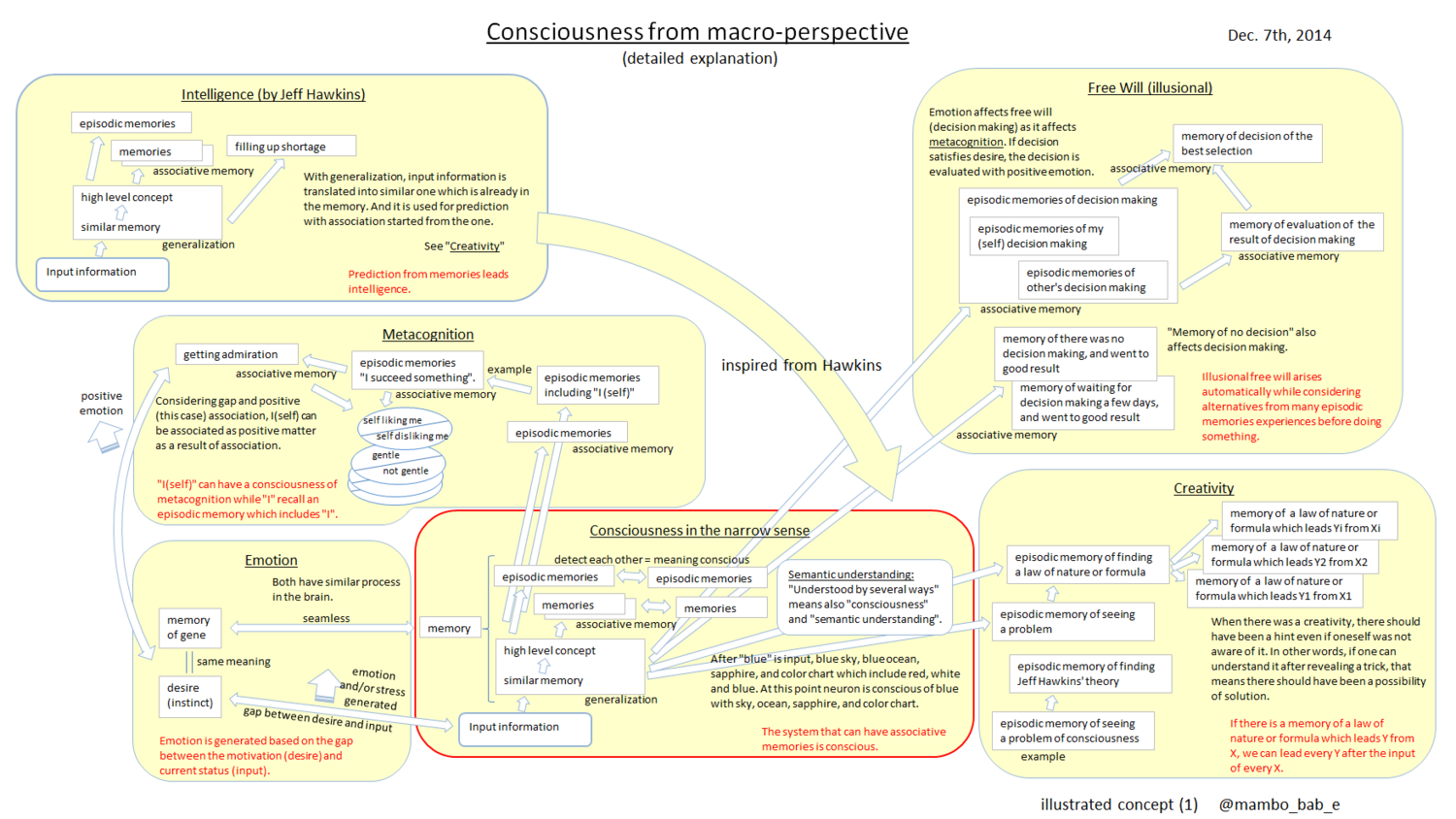 (2) Consciousness from macro-perspective (simple explanation): That also shows consciousness in the narrow sense. 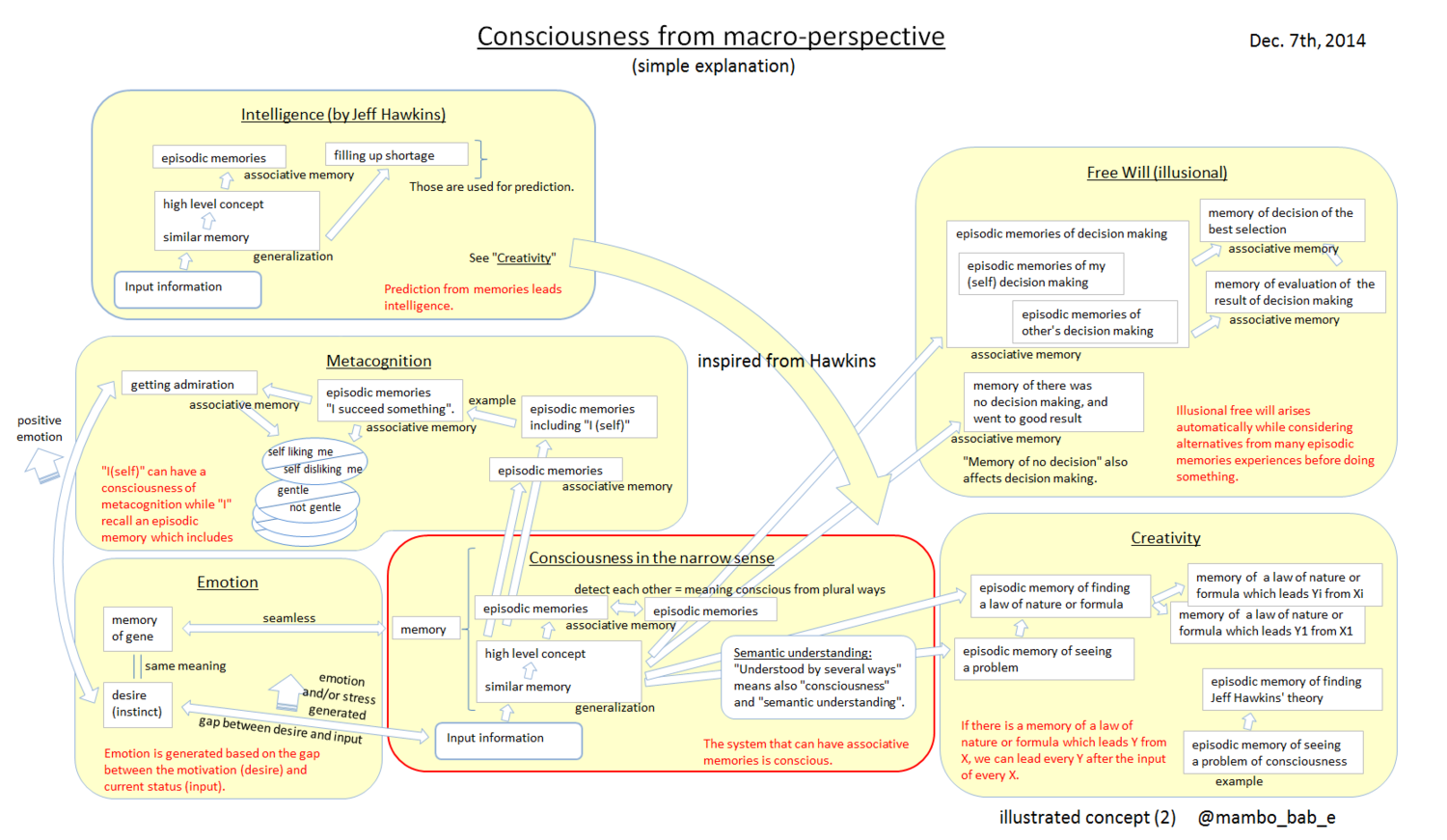 (3) Other hypotheses for consciousness comparing with BLUE. 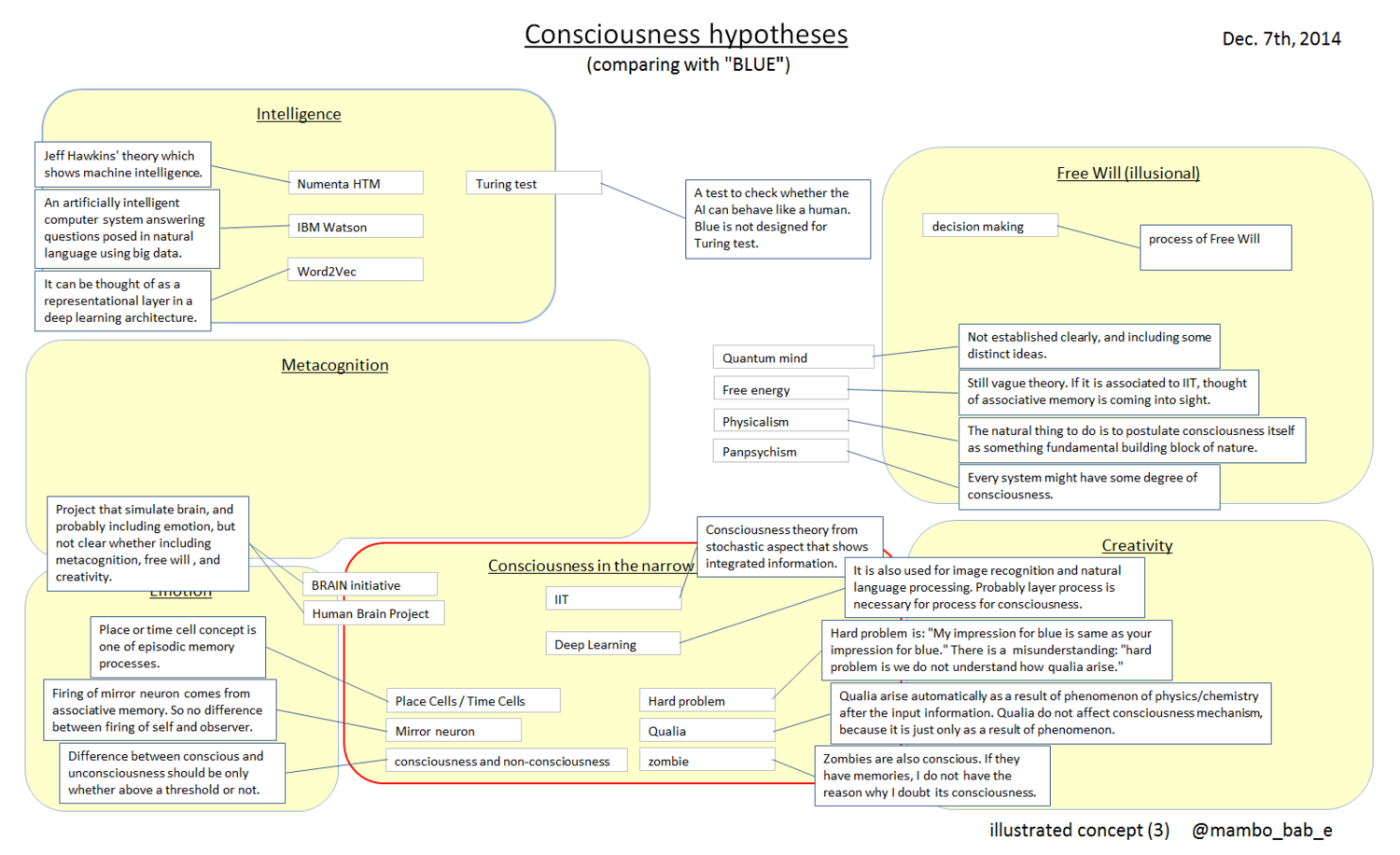 With technical issues current toy model uses Von Neumann architecture at this point, even though actual neocortex uses elemental device which uses a kind of neural network. However this toy model can work as if it is based on the real brain architecture. With Von Neumann architecture program need to use searching, though actual brain has physical connection among neurons. However, this toy model program works for consciousness, emotion, metacognition, free will, and creativity, because this model is very primitive. One point only we need to consider is "frame problem" is going to approach after the system grow bigger. This issue remained, however I do not think this is the fatal issue, because basic function is implemented here. I expect Hawkins to establish the new neural elemental device in order to clarify vital brain. (However, please note this device problem is only a tool problem. And the concept mechanism of consciousness should still be an established fact.)

Discussion
Google, IBM, facebook are investing big money in artificial intelligence business. And BRAIN and HBP project which research human brain are gathering a lot of researchers and money and time also. At this point they do not seem to understand the hint of consciousness mechanism. However they will be aware about (my) consciousness mechanism in not so long time, because there are a lot of researchers there and they can research it further.

Regarding Hard problem, I show something here based on my hypothesis: There is only one Hard problem. (Other problems are all easy.) We can not say, "My impression for blue is same as your impression for blue." This only is Hard problem. So (this is very important) it is not the Hard problem if you think "Hard problem is we do not understand how qualia arise." Qualia arise while input information comes. Input information is processed and expressed electrically and chemically on the neurons. Please note qualia arise automatically as a result of phenomenon of physics/chemistry after the input information. And you can feel realistic qualia (as spiral of phenomenon and embodiment... See another blog entry). On the other hand (result of) qualia do not affect phenomenon, because it is just only as a result of phenomenon. So qualia do not affect consciousness mechanism.
"Crystal" that Christof Koch shows means qualia themselves actually, but I need to point it is also only a result of consciousness. Actually crystal can be detected electrically and chemically, because it is a result of consciousness. I would like to hear real intention of the proposal from him.

Regarding Turing test, Blue is not designed for Turing test. Blue is designed simply to show that blue can show consciousness. Even if its response did not show a perfect answer, it is important to show the process to create consciousness that human shows.

Is this hypothesis understood with Integrated Information Theory of consciousness (IIT) by Giulio Tononi? I think it is possible. Associative memory means integrated information, and should be shown with complicated and various degree of intensity. Additionally this hypothesis has a panpsychism characteristic of Christof Koch, since each element can detect and can be detected each other. Panpsychism is not only an Oriental thought which we can not approach easily, but also a thought which have some degrees of freedom which can integrate but which do not necessarily have to integrate.

Important thing is neurons can memory and generalize with Hawkins theory. And also can use associative memory, and associate crazy things using plural association. At this point there were not any comments from Jeff Hawkins. However I would like to make efforts to let many researchers understand this hypothesis. 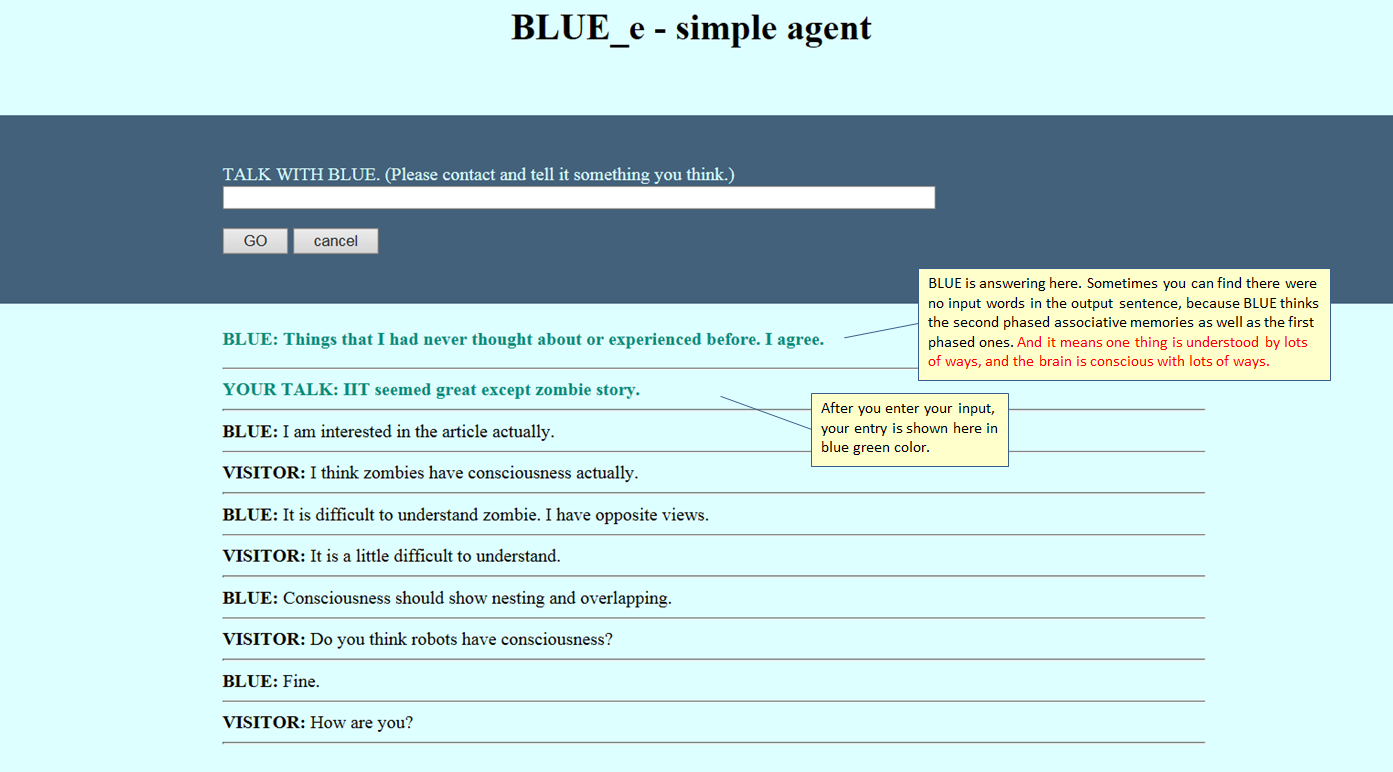 If I am an object that can only have memories and associative memories, it may not be sad thing. Probably paradoxes about consciousness are able to be explained by this hypothesis. As shown above I appreciate many discussion.

Before, I released the similar program for another language. But this is first for English speaker.

Login to quote this blog

You cannot quote because this article is private.